Sharmin heading towards fulfilling her determination being an entrepreneur 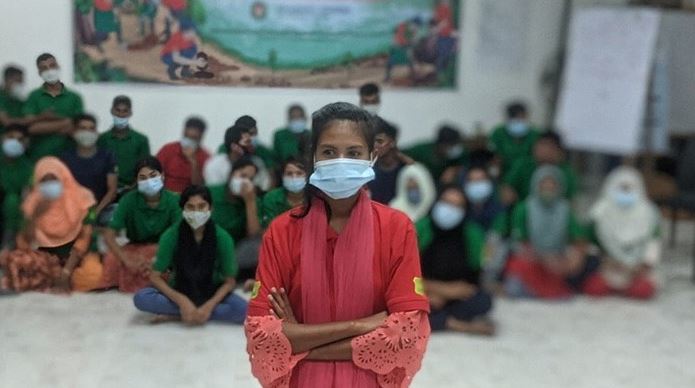 Sharmin Akter (18), one of the women participants of Youth Conservation Corps (YCC) first cohort training was living with her aunt’s family since her parent’s passed away in 2007. Due to poverty, she could not continue her study after class five. Despite her dire situation, she always dreamt to become self-dependent and support her poor uncle and aunt with her earnings.

Through a community level meeting of Compass’s YCC team as a part of starting a long-term residential training for the disadvantaged youth who could not complete their school education, Sharmin learned about the training. She also found the training of YCC as an opportunity to pursue her dream. However, joining a five-month-long residential training of YCC was also very challenging for her as she was the person to take care of the chores in the family. Besides, considering their very conservative family culture and other religious values, her uncle and aunt were reluctant to allow her to attend the YCC training.

Observing the strong determination and dream of Sharmin, YCC team has convinced her uncle and aunt by explaining to them about the stipend facility of the training, and potential earning opportunities in the future after attending the training along with developing leadership qualities within the participants including Sharmin. Finally, the family was convinced to let Sharmin join the YCC program.

At present, Sharmin is one of the most active participants of YCC first cohort. She is learning tailoring along with other soft skills. In addition, she is also interested to do nursery business in her backyard as an additional income-generating activity. She is now looking forward to a better future and working hard to achieve her dream to be an entrepreneur.