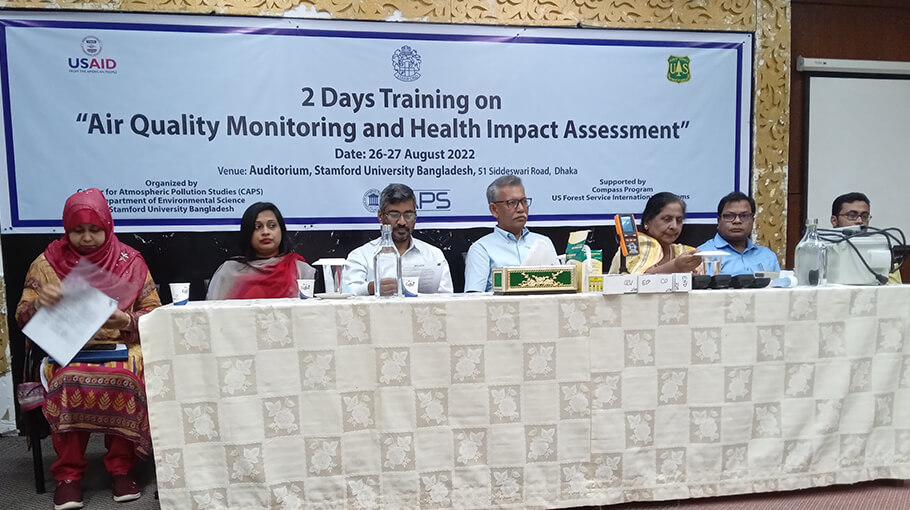 The average life expectancy of people in Bangladesh will increase by 5-7 years if air pollution could be reduced in compliance with the global standard.

“Incidents of a huge number of premature deaths happen in Bangladesh due to air pollution. The country has been seeing an alarming increase in deaths due to air pollution in the recent years. Over 1.5 lakh people die each year in the country from diseases caused by air pollution,” said Prof Dr Ahmad Kamruzzaman Majumder, chairman of the Centre for Atmospheric Pollution Studies (CAPS).

Dr Kamruzzaman, also chairman of the Department of Environmental Science at Stamford University Bangladesh, further said that the average life expectancy in Bangladesh would have been 5-7 years higher if pollution levels did not exceed the global standard.

He said these while delivering his presidential speech at the opening session of a two-day long training programme on the campus of Stamford University in the capital on Friday (August 26).

Other speakers of the event as well as environmentalists, researchers, and experts on air pollution emphasised taking effective measures to reduce the air pollution in the country in the interest of public health.

vehicle emission, trans-boundary air pollution, household fuel consumption and waste burning for the rising trend of air pollution in Dhaka as well as Bangladesh. The sources of air pollution in Bangladesh are increasing due to huge population density, lack of good urban planning, absence of proper management system, lax monitoring, and lack of coordination among various agencies, they said.

The CAPS in collaboration with the Compass Programme of US Forest Service International Programmes arranged training programme on ‘Air Quality Monitoring and Health Impact Assessment’.

Dr Abu Mostafa Kamal Uddin, project lead at Compass Programme, spoke at the inaugural session of the training as the chief guest, while it was addressed, among others, by Dr Gulshan Ara Latifa, academic adviser at the Stamford University’s environmental science department and a former chairman at Zoology department of Dhaka University, Shams Uddin of Compass Programme, Tauhidul Hasan, principal consultant at EQMS Consulting Limited, and Mahmuda Islam, senior lecturer at Stamford University.

Bangladesh is one of the most densely-populated countries in the world and the country has been struggling with air pollution for a long time. Particulate matter pollution continues to rise in the country.

The capital city of the country Dhaka ranks highly amongst the world’s major cities in terms of poor urban air quality.